Fado… It’s a traditional music style of Portugal.
When you travel to Portugal, it should definitely be on your bucket list.

Fado is commonly played and sung in some areas of Lisbon and the “Fado house” (where you have Fado live) is not easy to be found in other cities in Portugal.

However, in Coimbra which is in the Central region of Portugal, it’s not the case.

There is a different Fado culture from Lisbon’s, called “Coimbra Fado”, which the people in Coimbra has succeeded since hundreds of years.
In this article, I’m going to talk about Coimbra’s beautiful Fado culture that I saw with my own eyes, as well as a place which has FREE FADO LIVE!

Fado, what about that?

Before talking about Coimbra Fado, maybe I would have to explain a bit about “What Fado exactly is”.

Fado music was born in Lisbon’s downtown, more specifically, in the Alfama district.

Now it’s turned to one of the famous tourists destinations in Lisbon, at that time, it was one of the poorest neighborhood where many immigrants from Portuguese colonies settled down, as well as many families of sailors who were gone to the ocean leaving their families.

In that life, which was not really easy and fun, they started singing their emotion of “Saudade” (melancholy, nostalgia, missing somebody they love) as Fado music. That is the origin of Fado.

Its melody comes from Portuguese guitar is really nostalgic and melancholic. The Fado singers put their passionate voice on it, and we, listeners can immediately get the mix of feeling: sadness, nostalgia, desperation but full of love.

If you already know the Flamenco, which is a traditional music and dance style of the South of Spain, you can easily realize the difference : the Flamenco is like the sun, which has bright hope even in its sad melody, and Fado is like the moon, which is always sung about negative feeling

I really recommend trying these two styles of musics which are completely different even though they are from the countries just next to each other, and you can see and compare the different cultures.

About Coimbra Fado 1：the singers are always male

The biggest difference between Lisbon Fado and Coimbra Fado is that: All the singers are male in Coimbra.

In Lisbon, Fado singers are generally female.
That could be understood quite easily if you remember the origin of Fado music in Lisbon: They were waiting for their sailor husbands who had gone to the ocean.

That’s why  Fado in Lisbon is mostly sad and melancholic, but Coimbra Fado is a bit different.

Fado singers in Coimbra are mainly the students of Coimbra university, or the  graduated people.
Sometimes you will see they sing about their student life with kind of “Pop-styled” melody. (It’s still melancholic though)

About Coimbra Fado 2：Fado live for everybody on place

Second difference: In Coimbra Fado’s live, the listeners can sing together and can clap hands with the music.

In the Fado houses in Lisbon, it would never happen. Before the live, the singer will say “Keep quiet during Fado”
Fado in Lisbon, is to be enjoyed listening and seeing.

On the other hand, in Coimbra, it’s totally different.
The people sing together (they sing as if they were a singer), or they are talking while the live, they clap their hands when the singer asks… Kind of freedom.
Fado in Coimbra is to be enjoyed with everybody. 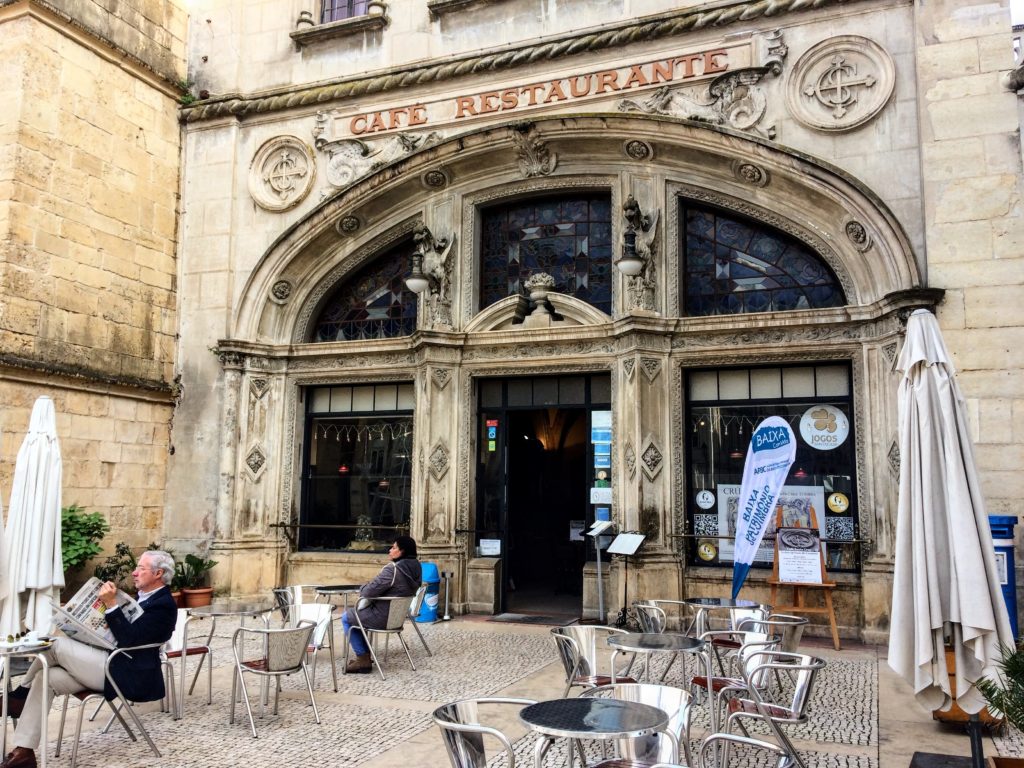 I went to this place, “Café Santa Cruz”.

A restaurant-cafeteria which is in a renovated old church, located on 8 of May Square which is the heart of Coimbra’s downtown.

Before the Fado live starts, I was already excited to be able to listen to Fado in such a traditional atmosphere. 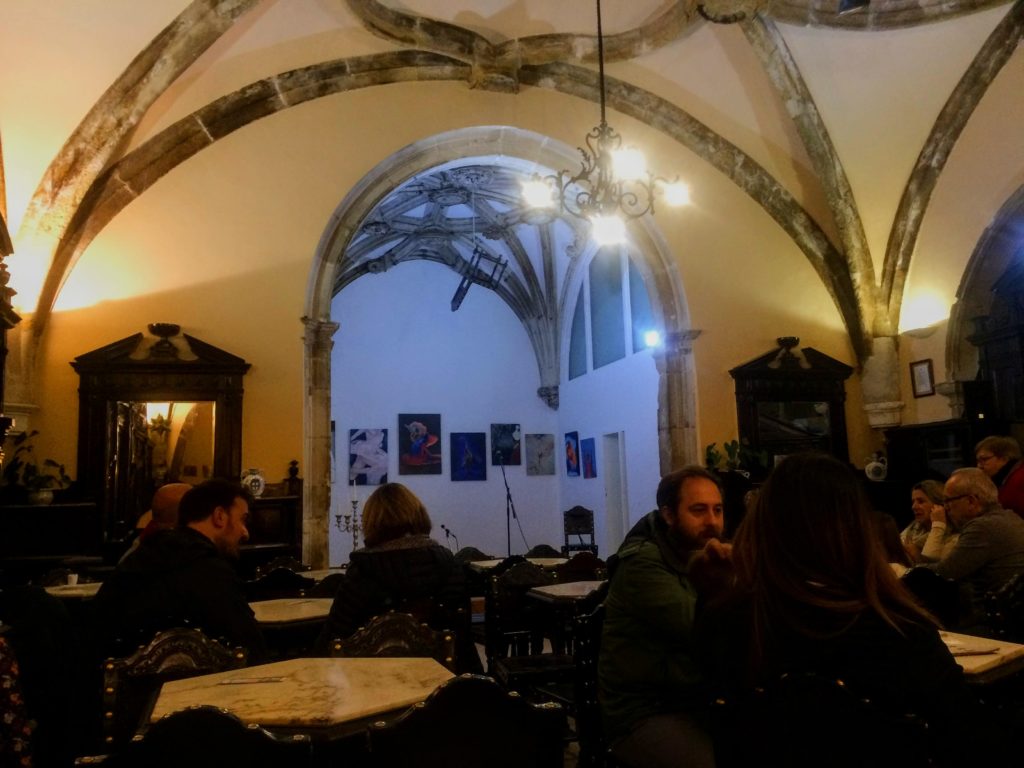 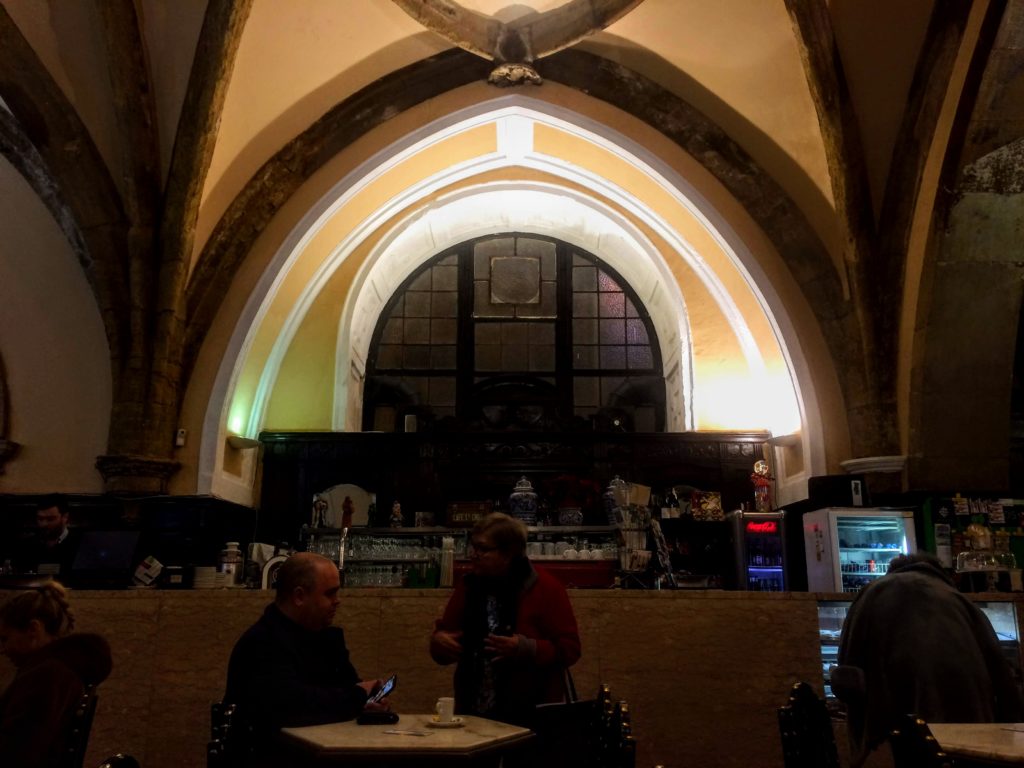 You don’t need to care if you are alone. I was alone but it was really comfortable.
The price of food and drinks are still okay even though it was slightly more expensive than normal price. (1 pint of beer cost €3.5)

If you don’t drink, you can still be there with just one coffee. After that, you want nothing to pay. Awesome.

The Fado live had been supposed to start from 18h, but the people started to take their seat from that time.

Nobody expects the time would be strictly respected in Portugal, so the live finally started 20 minutes later than the scheduled time. 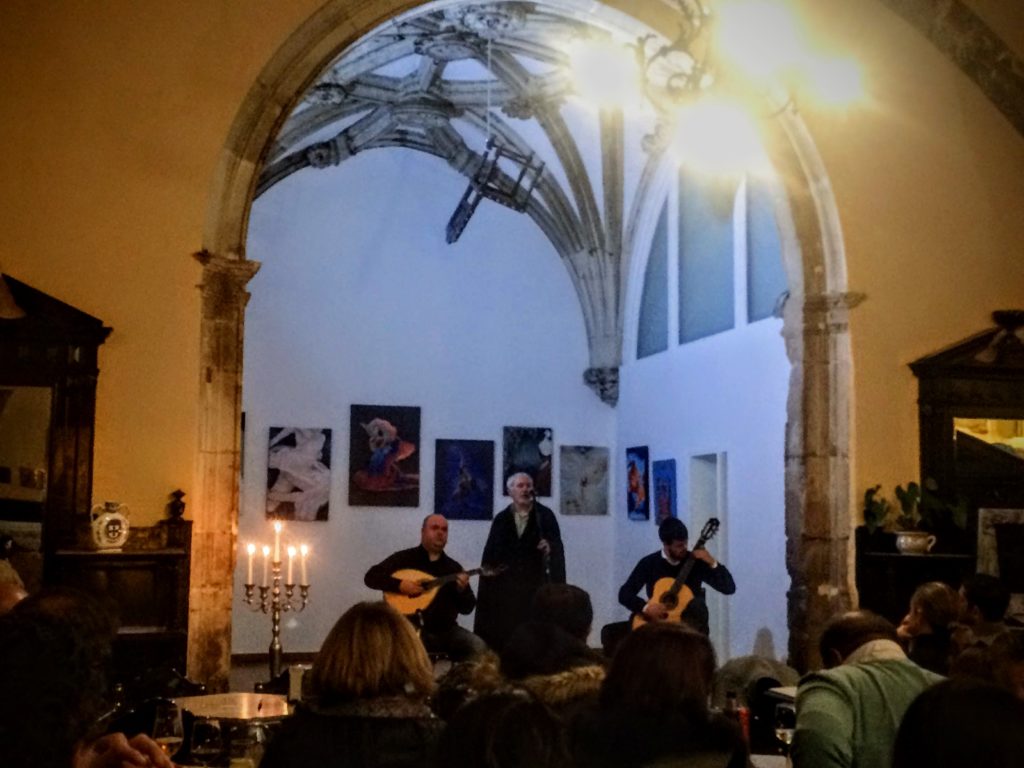 Melody of Portuguese guitar, the voice of singer with nostalgia but passion, the people singing together…

It was magnificent. The best experience in Coimbra for me.

As I said, the melody was not as sad as lisbon’s Fado, and they have some tunes which had medium-fast tempo.

Could I really be here for free?
That’s what I thought firstly.

There were few tourists but many local families and couples, which was great for me as well, because in Lisbon, the Fado lives are often filled with tourists.
If you want to taste a authentic Portuguese music culture like locals, just go to Coimbra!

Comments：As far as I know, this is the only place that you can enjoy a free Fado live in Coimbra. You can check the schedule on “agenda” tab on their website, or you can simply ask the information in tourist information center in Coimbra.