When you are traveling and want to find a local place to have a typical local dish of that place, you will search it on web or check your guidebook.
In Portugal, especially in Lisbon and in Porto, there are many restaurants which are popular for tourists and have good review, that means you won’t have any language problem  because the employees certainly speak English.

How it works in this kind of restaurants are so similar to our countries’ so there won’t be any surprise.

However, not many websites or guidebook don’t tell you clearly how it works in more local-like restaurants in Portugal.
Generally speaking, the employees in local restaurants only speak Portuguese, not English or any other languages (they maybe understand you if you speak Spanish, but they don’t SPEAK it)

So, it makes you hesitate to give it a try because you don’t know the system of these restaurants and you don’t speak Portuguese?
I really understand your feeling. When I had just arrived to Lisbon, I didn’t know any Portuguese, and I was a bit nervous about going eat in a local restaurant. So in the beginning I always went to touristy restaurants in downtown expecting to communicate in English with employees, or went to Fast food restaurant!

But you are going to Portugal! There are many local restaurants and cafeterias where you can taste authentic Portuguese cuisine with cheap price, so why not?

Still, that’s cool to eat in a 5 stars restaurant where you can have an excellent service, modernized dishes which are really well decorated and…a surprise when you ask for bill.
I personally recommend local restaurants to have a great portuguese culinary experience, which is so simple and modest, and you will not have any surprise of your bill!

In this article, I’m going to talk to you about the restaurant culture in Portugal, including some useful tips about what you need to know before going there, and what you must do when you are at the place.

How it works in local restaurant in Portugal

Enter to the restaurant 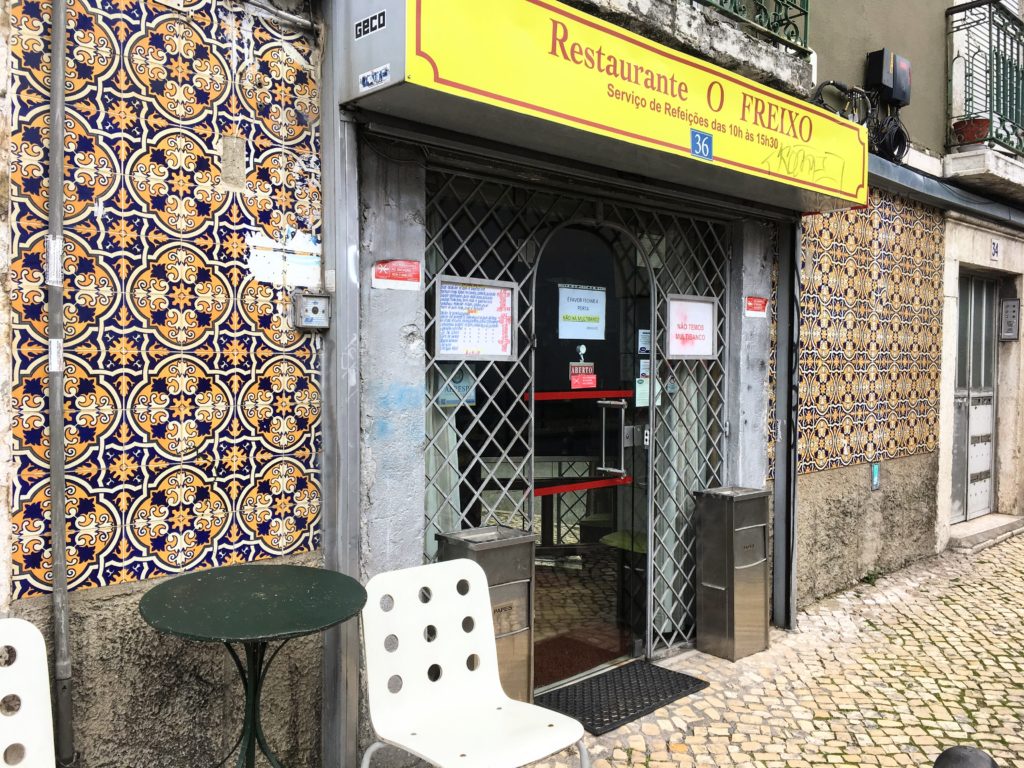 Of course, you have to enter the restaurant to taste their great food!
However, not likely to our countries, you don’t need to wait the waiter to ask him if you can take a seat.
Nobody comes to you to say “Hello how are you?”

When you enter inside, you can directly choose a table and take seat.
Don’t forget to say “Bom dia” (in the morning) or “Boa tarde” (in the afternoon) to the employees, though! 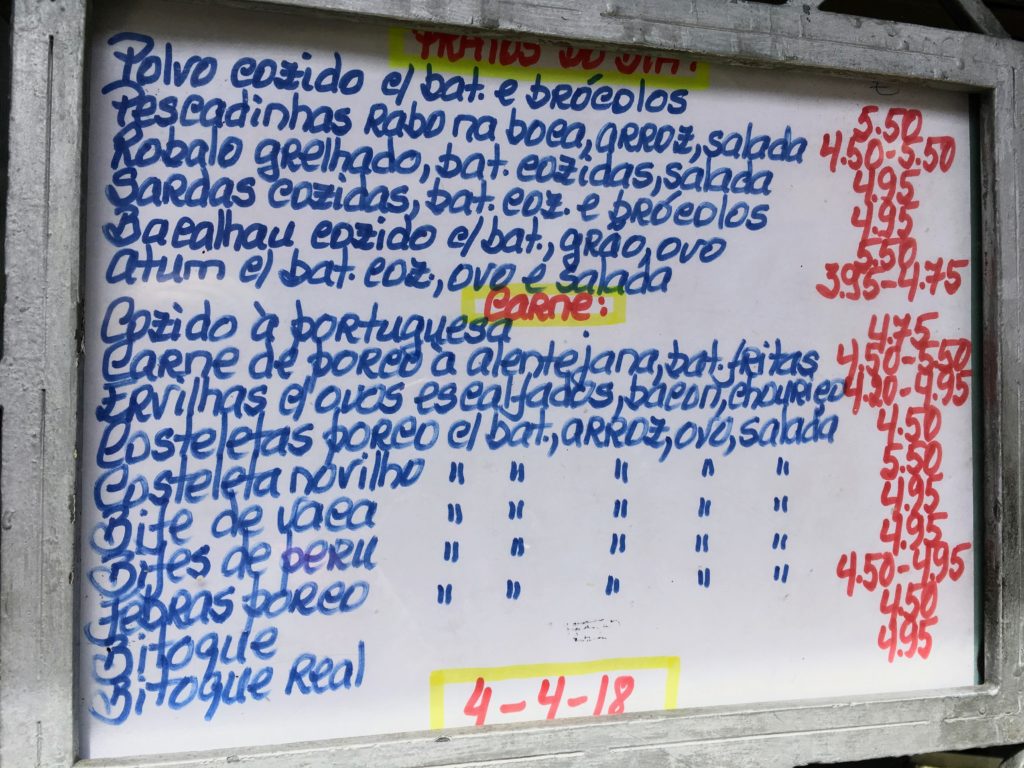 “today’s special” board. For me, it needs a big effort to read!

So you took a seat and the waiter brings you the menu after 5-10 mins (Tips: in Portugal, you need to wait for everything, all the time)

In the menu, everything’s written in order of

Like many European countries, you should order drink, soup or starter, and main dish at this moment.
The waiter will come back when you will have finished your main dish, to ask you about dessert and coffee.

When you are in a local restaurant, worth trying daily menu : Prato do dia.

As this name says, you will have a main dish that changes every day, and almost all the cases this menu includes soup, dessert, drink and coffee!
Sometimes you have choices of main dish of this “Prato do dia”.

What they have as Prato do dia, you can see on a hand-written paper in the menu or on the wall. They do that like this because it changes every day.
In general, this special menu is written only in Portuguese even if they have an English menu.
If you want to ask about the ingredient or anything, you can ask the waiter but you may need some body language skill!

In many restaurants, “Prato do dia” is only available for lunchtime 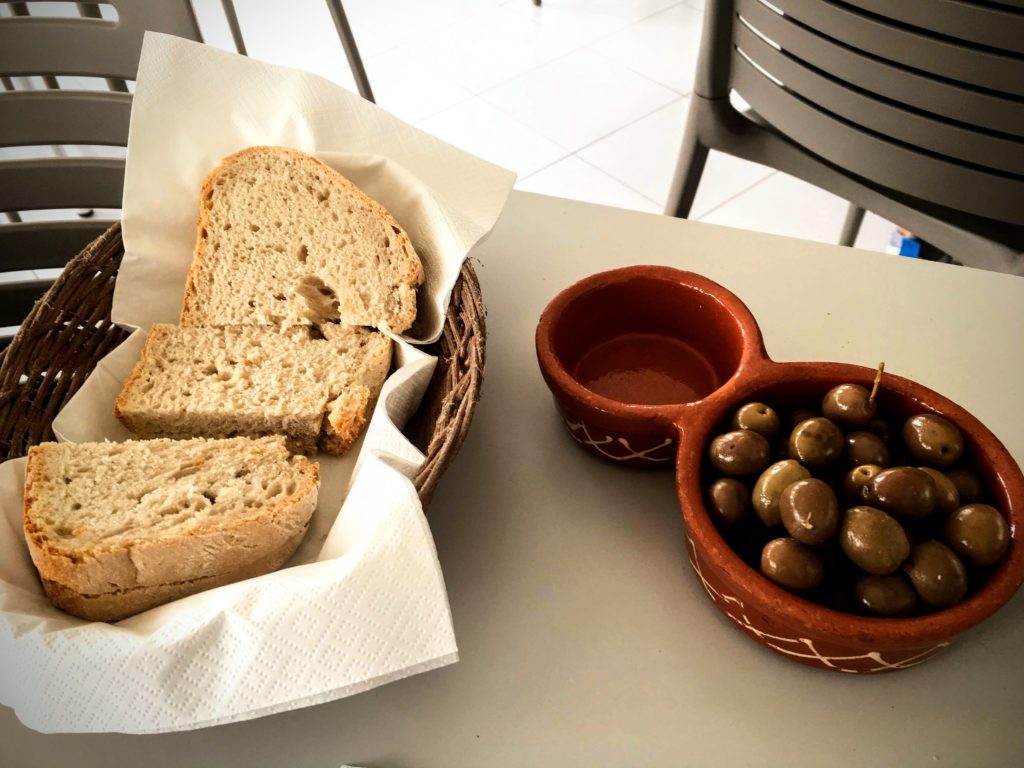 After ordering, the waiter brings you some bread and small starter. (Always olives, sometimes some cheese as well)

Attention! It is not like in France or Spain where the bread is always served for free: you will have to pay later.
Though it costs just 1 or 2 euros so don’t be too stressed!

If you’re really sure not taking them, you can just say no thanks at this moment.

You could even put them aside on the table as well and later could decide if you take. If you don’t eat them, you won’t need to pay for them when you leave the place. 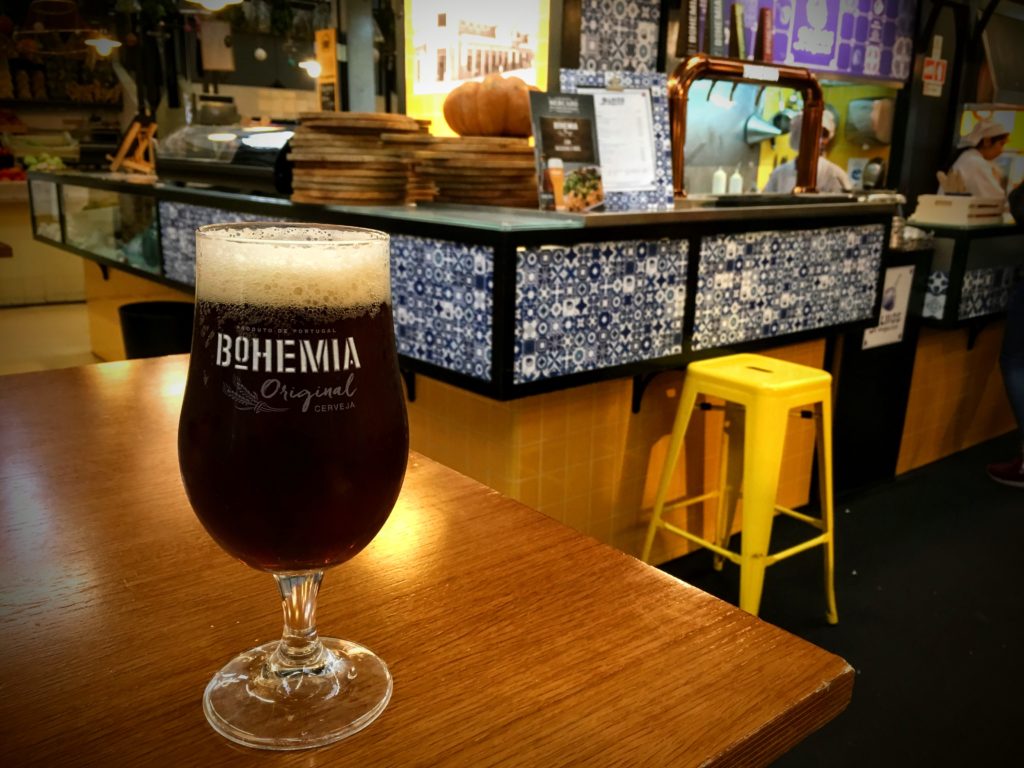 For lunch, for dinner or no matter when, the people in Portugal enjoy alcohol. Many of them take some wine or some beer even when they are just in a small lunch pause of work. (What a beautiful life!)

Here you can try Vinho da casa, which means a glass wine (or even in pitcher). Of course, you can choose  red (tinto)or white (branco).
Obviously, that’s not the best wine in the world, but for its price (only 0.5 euro for a glass), the taste is good enough.

If you take the “Prato do dia”, which includes a drink, you can choose among Copo de vinho (glass wine), Imperial (glass beer) and soft drinks. Anything else or larger size will be charged extra.

Not like in Canada, there’s no restaurant where you can get free tap water so if you want some water with your meal, you have to order a bottle of water. (I think in many european countries that’s the same stuff ) 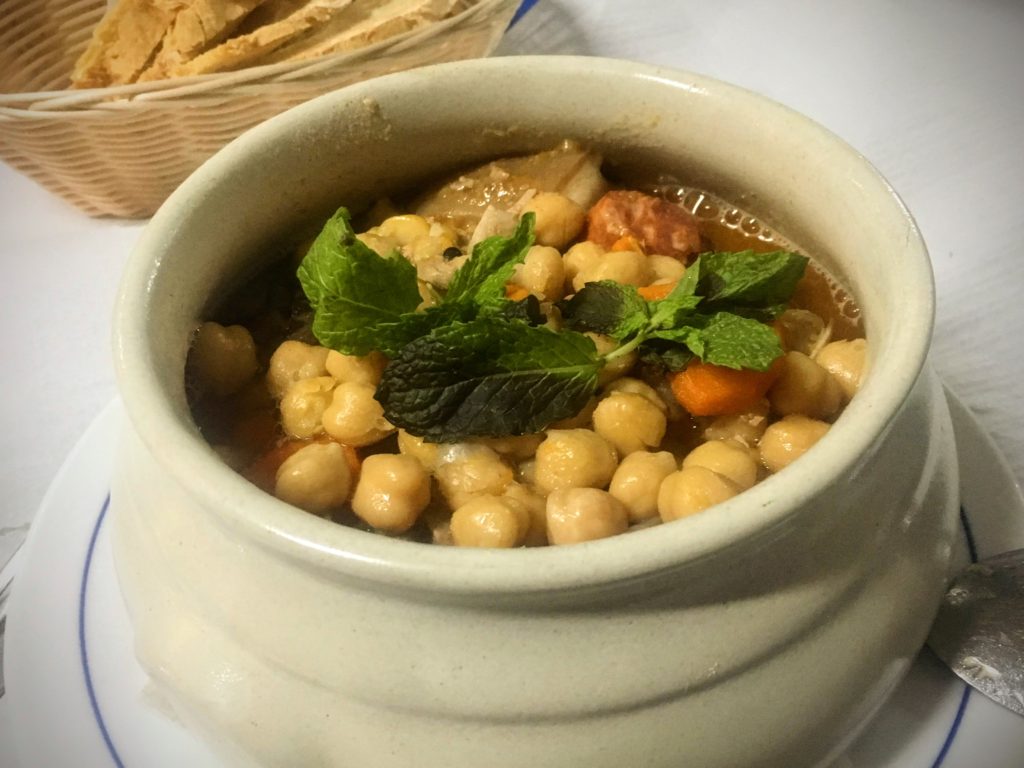 If you ordered a soup, it comes after a short waiting time because they made their soup in a big casserole in the morning.
In Portugal, It’s so rare to order a starter besides main dish. Many people just take a soup before their meal.

There are many varieties of the soup in Portugal depending on the region, in my opinion, any soups are really delicious and differently made from our countries: you won’t have any chance to eat kind of pottage made from milk and cream. Portuguese soups are generally made with meat bouillon and vegetables. Simple is the best! 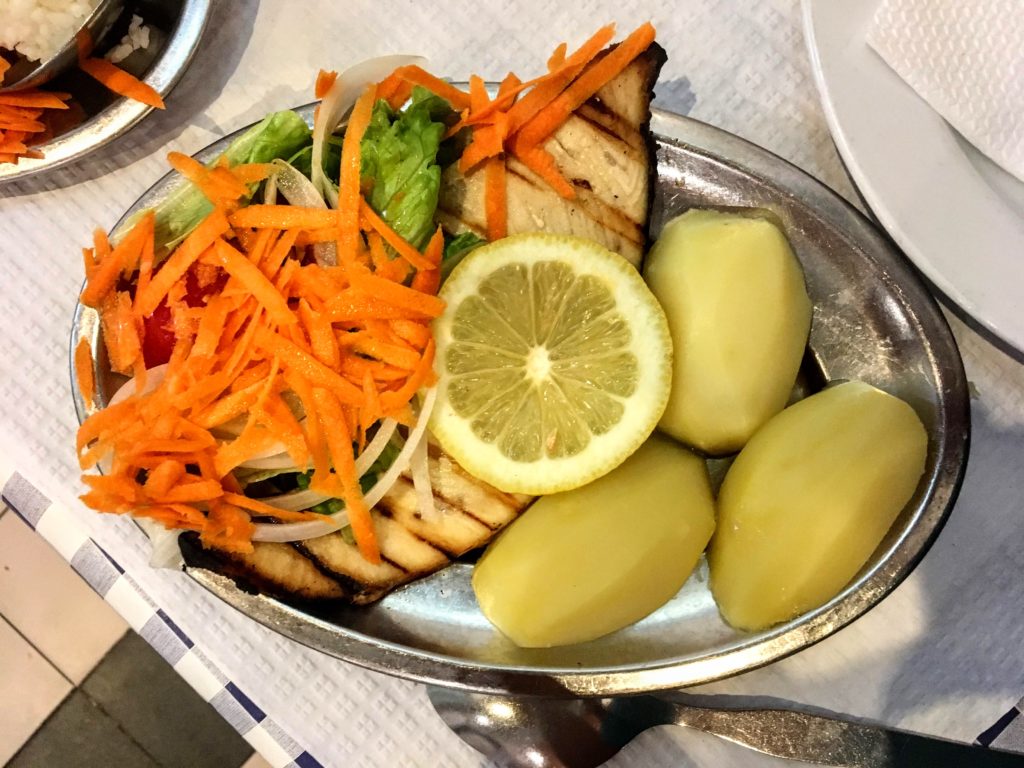 After the soup, it’s time of main dish!

Portuguese cuisine is relatively simple and not so salty. Garlic, coriander, olive oil and just a little bit of Piri Piri (hot sauce or powder) are the only basic seasoning.
They don’t have ketchup-and-mayonnaise culture so don’t ask for them!

Main dish always comes with a side dish of your choice.

When you order, you choose one of these side dish but you can ask if you could have 2 or 3 of them with a small portion of each.
“Half rice and half fried potatoes”, “half potatoes and some salad,and also some beans”… They are generally opened to listen to you.

“Arros” (rice) in Portugal is maybe a bit different from your country’s.

They use a long grain rice and cook it with chicken bouillon, some garlic and some olive oil. It’s really tasty.
Better trying it at least once in Portugal. ↑Cheese cake covered with honey and a sweet prum on it
Portuguese desserts are generally so sweet and the portuon is big.
If you don’t want, you can skip it and take a coffee.

Even though Portuguese desserts are not really well decorated, you will love the simple and authentic taste of them. And the desserts are often home made! 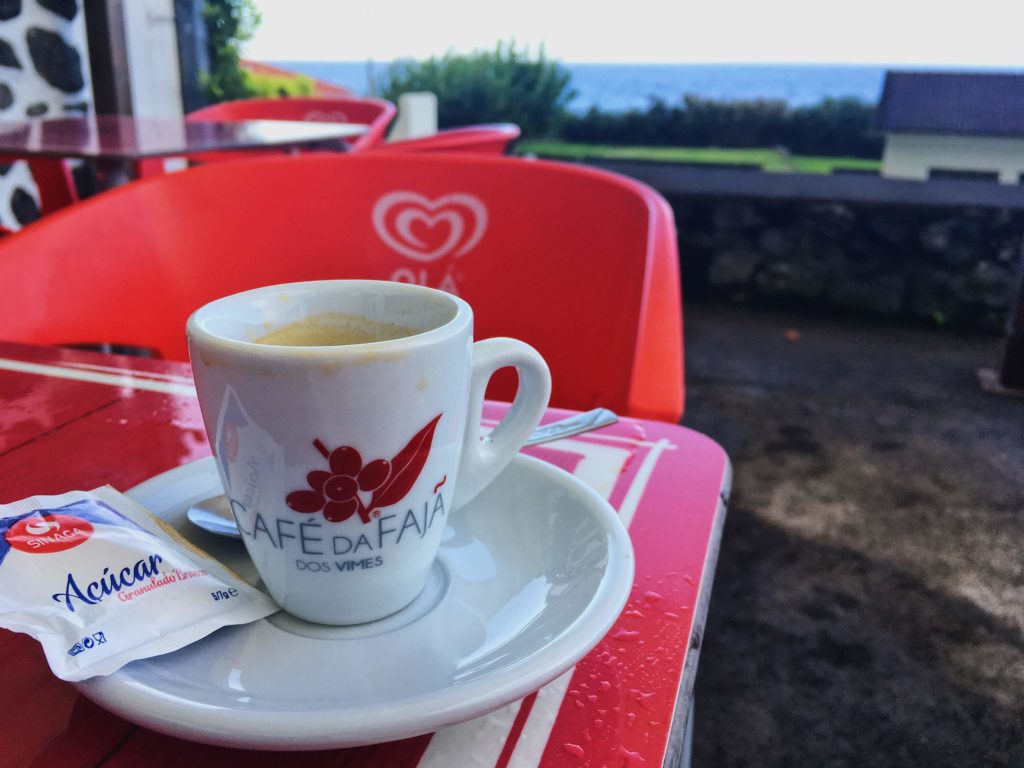 In Portugal, culturally, it’s not so commun to take coffee with a dessert: many people take coffee after finishing their dessert. So a cup of coffee means the end of your meal.

If you order simply “One coffee”, you will have an espresso. Local people put much sugar into it and drink it.

Some Portuguese people consider that other types of coffee than this espresso are not coffee, but if you prefer less strong one, don’t be shy to ask what you like.

“Galão”, Portuguese style Café Latte is made of single espresso and much hot milk. Always in a tall glass↓ 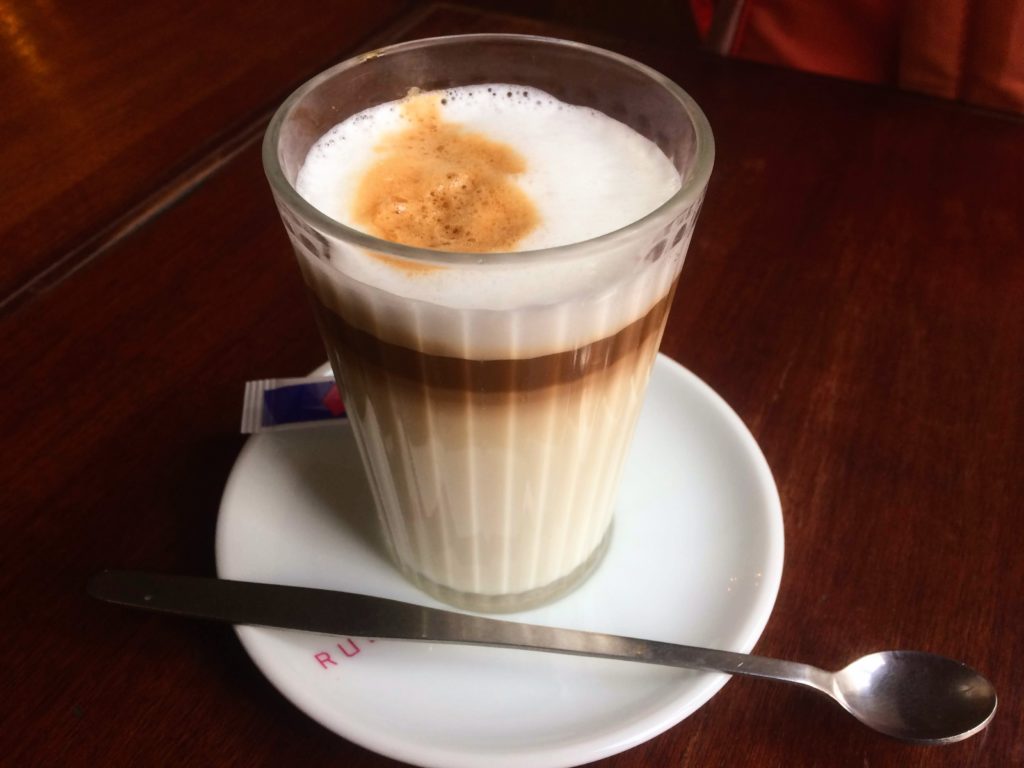 You will also like “Abatanado”,an American coffee
is espresso with some hot water so it’s less strong.

P.S. In Portugal, “filtered coffee” doesn’t existe in the restaurants!

For tourists who don’t speak local language and who don’t know so much about the system, paying the bill is always complicated.
In Portugal, actually, how to pay is different, depending on each restaurant.

In many restaurants, you can ask a waiter for your bill without leaving the table, and you will get your bill.
But maybe you already know, it takes so much time because it’s Portugal!

The simple and easy way to pay your bill is to go directly to the cashier.

If you didn’t take bread and olives, make sure that these things aren’t written on your bill.
In Portugal, Tax is always included. That means the total price of what you have taken is exactly the price that you pay.

About payment method, it’s better you have some amount of cash especially in small local restaurant. Because there’re few restaurants which accept international credit card for the payment. Even if they have a machine, it’s sometimes just for Multibanco card, kind of debit card which is used only in Portugal

When you pay, tipping is always the problem, isn’t it?

In Portugal, there’s no tipping culture!

If you are in a high class restaurant, or if you had a amazing service, that’s not the case. But in general, you don’t need to leave tips in casual restaurants.

If you want, of course, you can leave some tips even in a local restaurant though. Nobody will refuse and it’ll be appreciated. Even in this case, it’s not at all necessary to tip with 5 euros’ bill or more : just one or two euros small money will be enough.

To finish the discussion about the bill and payment, you need to know in some small local restaurants, you need to tell what you ate when you pay.
They have confidence in their customers and this is traditional Portuguese style. I found that so nice.

If you find this type of restaurants which still keep this billing system, you are really lucky. But be honnest!

Better to book in advance?

In Portugal, it’s not necessary to book a table before, except high grade ones or touristic ones.
Many local restaurants don’t even accept booking.

Sometimes, you see popular restaurants for local people are full, in this case, you won’t have any choice other than to wait for your turn. Welcome to Portugal!

Compare to the dearest neighbor, Spain which is known for taking their meal so late (called “Spanish Time”), in Portugal, the people take meal a bit earlier.

However, as the sun goes down later in Portugal than other countries in Europe, meal time is relatively later than these countries.

Here’s the general mealtime for each meal:

Between lunch and dinner, many people take their “Lanche (Snacks)” with small sandwich or some sweet pastries and cofee.

If you don’t want to wait for your meal long time in the restaurant, avoid these hours and try to eat earlier than local people do!

The quantity of the dish is enough?

Sometimes, you will want to ask “Is it really for one person?”

If you are not alone, you can order a main dish and share it.

If you are alone, dependiong on places, you could ask a “Meia dose” ,which means a half size. But it’s also depend on which meal you want to order.

Many tourists think to go eat in a local restaurant will be a challenge, because in this type of restaurants, not many people speak English, and you can’t imagine what you are going to eat because on the menu there’s no photo.

Even though you don’t know Portuguese and the employee don’t speak English, they will generously try to understand you.

Now, you probably have an idea about how it works in local restaurants in Portugal, so it’s time to try!
That opportunity will make you discover a different and authentic culinary culture.